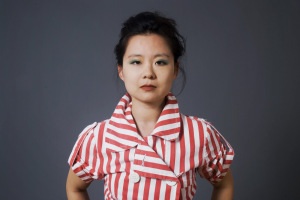 What kinds of projects have you been working on recently?
I began a new work during a residency at The MacDowell Colony (Peterborough, New Hampshire) last fall.  I just started creating content loosely, on my own body, without any set parameters.  I found that I was still thinking a lot about a piece I made in 2007, “Cult,” a duet for myself and another woman, that still had a lot to offer.  I never want to name the “aboutness” of a dance because I don’t believe that’s what the form has to offer, but there is something about a fucked-up relationship between two women who have a relationship that’s too intimate, in that work.  I wanted to return to that land because I knew there was more to mine.
I knew I didn’t want to make a solo, so I held an audition to find performers.  This was a strange move for me, if only evident to myself.  I think it’s not the downtown dance way of doing things, but I was really interested in seeing how the field had changed, in finding some gems without established reputations.  I was interested in being very dry and pragmatic with that part of the process.
Next came a residency in the spring at Baryshnikov Arts Center (BAC), which was a compact and intense work period with the three women I hired.  So, whatever I had started conceptually at MacDowell had snapped to in the form of a trio.  I’ve taken note that the way I work with myself is utterly divorced from the way I work with other performers, so in that sense, there’s still this other battery of ‘stuff’ that I’m only comfortable putting on myself for now.  I’m not sure where that material goes just yet.
Two weeks after the BAC residency I flew out to the Bay Area to be in residence at Djerassi.  Djerassi is situated on a mountain on a former cattle ranch in the Bay Area, though incredibly secluded and remote.  It seduces you into thinking you have the world to yourself.  That was conducive to making my art.
I was alone again so I continued to make material intuitively, working with a discrete set of objects as content instigators:  bed, mirrors, wine glasses and nylons (on legs and to cover the face) to build the choreography.  I responded to these objects as talismans as I moved through an improvisational score based on incanting.
What do you say about the themes you have been working on during the past year?
I’m finally acknowledging to myself that I am fundamentally interested in women: women’s bodies in the form of dance.  Women are mysterious to me, maybe at their most compelling in relationship to each other.  I’m just drawn to strange and powerful and frightening relationships between women.  There are a slew of films that come to mind as touchstones in their treatments of strange relationships between women: “3 Women,” “The Bitter Tears of Petra von Kant,” Breillat’s “Bluebeard,” “Mulholland Drive.”
I’m also drawn to the nature of ritual–what it means to enact certain rites, to supplicate, to reveal something intimate that’s not intended for anyone else’s eyes.
You are a conceptual choreographer, how did your thinking shift, in relation to your artistic development, how about your identity?
I’ve always understood, fundamentally, for me, that dances hang on form.  But as I grow older and my eye gets sharper, I actually put that more and more into practice as opposed to getting hung up on any specific content, or getting really militant about execution.  It’s all about proportion with the fundamental elements of choreography:  time, space and bodies.  And how I organize these things with and against one another, undermine the content, etc.  I value ideas first and foremost, and then rigor in the execution of those ideas.  I am not engaged with issues about idealized and beautiful bodies in dance.
Name your most important influences in the dance field?  How about other influences, and mentors?
When I was 19 or 20 I saw Pina Bausch’s work for the first time at BAM.  Not to sound overly dramatic, but it changed my life.  My sense of what was possible in dance and art just exploded in magnitude.  Merce Cunningham.  RoseAnne Spradlin.  Tere O’Connor.  Visual art, fashion, music, literature.  Always film.
I don’t know if I rely so heavily on what I see in dance.  What seems to be more instructive and inspiring for me is to see how artists in other forms solve problems relative to their forms.
What visions do you have for the future, how do you see other activities (your board work and writing) in relation to your choreographic practice?
I am continuing to work on this new trio within the framework of two additional residencies in NYC (I’m not at liberty to say what they are at this time) that will take place over the next two years.  They are completely process-oriented, however, there will be showings.
As much as I resist it, writing about what I’m doing can help clarify to myself what I’m doing.  I can actually learn something.  Writing about making dances tortures me, but I secretly enjoy the torture, too, because it is a concomitant, compositional act to choreographing.  You organize information and you try to make the best choices to express what you want.  It makes me a better thinker, and hence, a better artist.
I’m no longer on the board of DTW since it’s now NYLA and a completely different organization altogether.  I’ve never had a feel for any kind of activity that can become the least bit bureaucratic.  I can be an insanely stubborn purist, so what feeds my choreography is entirely separate from any organizational activity.
Do you want to say something about the NYC dance scene?
It’s getting interesting.
(photo:Ryan McNamara)

New York City Mass Transit has a program called MTA Arts for Transit and Urban Design, which commissions artists through a competitive selection process to create original, site-specific permanent artwork for stations. This spring, there was also auditioning for a role of a subway performer. Link and more info here.

Grand Central Diary is a video created by London Squared Productions. It is currently part of the exhibition “On Time / Grand Central at 100” (curated and organized by MTA Arts for Transit and Urban Design). It is now on view through July 7 at the New York Transit Museum Gallery, which is located at the terminal. Grand Central Diary is a short film that shows the everyday routines at the station from a fun and quarky perspective of animated objects at the terminal and nearby.