Last month, New York based artist Linda Cunningham showed me her art studio in the Bronx, where she lives and works.  It is located next to the Bronx Art Space that is fostering arts education and collaborative artistic projects. She told me stories behind the art works, both the sculptural works and the collages that combine drawing and photography.  The studio is in a newly renovated building nestling at the heart of the historic urban Bronx.

Firstindigo&Lifestyle: Linda, you were one of the first artists to come to this location, how was the neighborhood back then, it’s been now a good fifteen years? You did a series of artwork digging into the Bronx history, in which immigration was a theme or a subject. There seem to be real person’s story involved, including documents, such as passports with photos. Could you tell about the project that was exhibited at the Andrew Freedman house in 2012?

LC: When I first moved to this historic landmarked area of the South Bronx, I began photographing the now renovated 19th Century row houses with brownstone trim, the contrasting graffiti walls with the shopping carts of the homeless. The barbed wire and I merged those images with a young Jamaican’s poetry and rubbings from the historic signage telling about Jordan’ Mott’s iron foundry. Later I was invited to create a large installation in No Longer Empty’s exhibition at the Andrew Freedman House, an amazing building designed like a Renaissance Palace, left from the early 20s when the Bronx was blossoming. My installation was constructed like an open book from broken drywall panels and broken old wood frame windows with each panel referring to an era of Bronx history. I along with other artists scavenged in the water soaked ruins, excavating the papers representing early 20th Century history of the Bronx. Including among them was the unusual passport of a resident of the house with two different last names, both apparently Jewish heritage, along with her photos. She had traveled all over Europe 1936, and through the Third Reich and into Switzerland several times, so her story suggests that she might have functioned as part of an underground.

Firstindigo&Lifestyle: You recently attended an Art Fair in Harlem, titled FLUX art fair in May 2015; do you have any specific notes in regards to engaging with the community during this festival?

LC: This was such a lively engaging event during which I enjoyed most interesting conversations about my work. The artwork displayed in this art fair was tough and engaging and in general more accessible than in most other art fairs

Firstindigo&Lifestyle: What captured my attention was your rich methodology of juxtaposing various elements. Your artwork depicted ancient olive trees in Italy that are approximately 800 years old by now. These trees got bacteria from Costa Rica somehow. Did the local community got involved in saving them?

LC: I don’t know anything about the local community. I just read about it in the Times saying that “they” are trying to contain the epidemic.

Firstindigo&Lifestyle: What you did in your collage was that you implemented the trees together with post-industrial photographic scene of Ruhr in Germany. This area used to be a center for coal, and now it’s gone. Tell, what is the particular message behind this juxtaposition?

LC: Both of these astonishing entities are vulnerable, but these amazing ancient trees will continue being productive and useful for centuries, whereas, the astonishing human designed technology is obsolete in 75 years or less and falls into ruin. 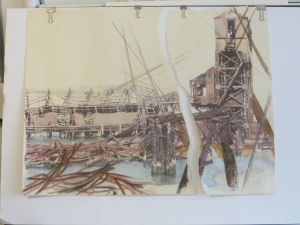 Firstindigo&Lifestyle: You have worked with sculpture. The bronze in them comes from ’recycled’ old weaponry from the Pennsylvania army base. The story behind the material is so intriguing, and the fact that you wished to turn the weapons into ’vegetal’, so the forms are like plants.  The texture of your sculptures remind of natural formations appearing rough, in some parts they are smooth, as if ironed.  Could you tell a little bit about the process, how did you find them, and how was it to work with the material?

LC: The bronze came from military scrap, which I obtained with some difficulty through a not-for-profit institution where I was teaching for a number of years, Franklin and Marshall College. The scrap bronze, which mostly came from ships, military ships, which are not really weapons. The bronze was smelted and poured into a defined shape in flat, oil-bonded sand molds.  The cooling of the hot bronze creates the rough surfaces as the bronze is poured. I am doing some casting currently.

Firstindigo&Lifestyle: Another element in your sculptures comes from nature. It’s fascinating how some of the rocks you have in the studio are from the ocean. The nature has worked in them so that the huge pressure in the floor has pressed the shells to attach into the stones. One of the rocks is also volcanic, and comes from the Californian coast. Do you have a specific relation to ocean and water in your artistic thinking, as I see the ocean appear in many of your collages?

LC: I have always been drawn to the eternal rhythm and power of the waves, but in my youth I had read Rachel Carson’s “The Sea around Us”, a beautiful factual narrative about the origins of life and the vulnerability of the life giving sea so essential to our survival.  Then super storm Sandy gave my early interest a new focus.

Firstindigo&Lifestyle: Also the technique in your collages is interesting, you are drawing and then adding laser photo transfers to paper. Even the surface has layers, cement or metal appears on the surface of the paper adding three-dimensionality. Could you tell more about this appeal?

LC: I have worked as a sculptor, and even when I am engaged with these large drawings I am drawn to include appropriate resonant texture and sensibility.  Even though photography can be manipulated it is essentially documentation and convincing as reality. The veracity of photography seems essential. My exhibition will be at Odetta Gallery in Bushwick in November 2015, and I will include especially drawings fused with sculptural elements. I was working on creating some new spectacular bronze forms that will be included in the show. I work on torn irregular shapes because reality doesn’t fit neatly inside a rectangle shape, rather it’s discontinuous, fractured etc. I work from places I have been, responding to particular environmental and historical issues raised e.g. from flooding of Venice, and a jungle growth strangling Ancient Cambodian temples. I built the installation with the Hebrew text some years ago after I spent a year in Berlin on a Fulbright scholarship. I did an installation In Kassel for an alternative documentary, and obtained many of the elements from the former East/West border known as the Berlin Wall.

I have always been drawn to the eternal rhythm and power of the waves, but in my youth I had read Rachel Carson’s “The Sea around Us”, a beautiful factual narrative about the origins of life and the vulnerability of the life giving sea so essential to our survival. Then super storm Sandy gave my early interest a new focus. -Linda Cunningham