Jennifer Wynne Reeves creates collages on boards that some include wire, some hair or feathers, and some thick applications of paint. This approach could by no means represent flat wall art. The dimensionality makes the art continue in space. Objects and paint are not decorative art either, but there is something folk-art in them; or retrospectively ”American” influences. These works suggest, as one work is titled, voluptuous meanings that are material, sensuous and touchable. Reeves writes as part of her artistic practice. Writing collide with personal meanings, and is symbolic in nature. 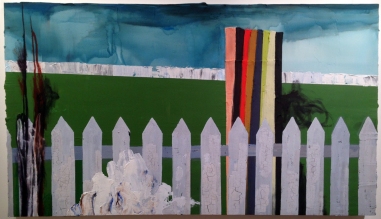 Her statements, or poems end up being part of the artwork itself. The artist was presented at the VOLTA by New York City gallery BranvinLee programs. The art presented at the art fair spoke about her illness, which is also reflected in her writing:

I think I might not be alive to go to my opening next September. I think I should rush to finish things. I wonder why my body is doing this or that. I think Christmas will be long. I think I won’t be able to save enough money for old age with all these bills, and that an imminent death would be preferable. I wouldn’t have to look for even more powerful galleries. -Jennifer Wynne Reeves 2013, Callicoon, NY

VOLTA art fair offers a chance to get in touch with art that promotes freshness and openness of ideas. The fair is relatively easy to access. It should be, that art fairs can be walked-in-to, so the art can be discussed and shared. VOLTA is like one big gallery space, where multiple stops lead to curiosities, comprehension, and even comparisons. Perhaps art displayed with this many references has a better chance for new perspectives.This year, the amount of techniques was compelling. Among the artisans of art was definitely a Japanese woodcut artist Katsutoshi Yuasa. For him, woodcut is a new way of seeing images and photography. The long process gives refinement of light, and adds the personality. Yuasa works on the printing process and reliefs based on his own digital photography. He uses traditional Japanese printmaking technique, which takes time. Carving and printing are all made by hand. For Yuasa, printmaking out of a photograph has a deeper meaning that what could be expressed in photographs. He thinks that photographs are more like a fictional two-dimensional surface. He says, that carving on the plywood, and the printing on paper, will add another dimension. The result is an abstract reality, which implies both subjective and objective perceptions. Yuasa also worked in Finland in an artist residence. The work ”Ilmatar” is based on his photograph of Finnish forest. He was presented at VOLTA by YUKI-SIS gallery from Tokyo.

Pius Fox is a young Berlin-based German artist, whose works are influenced by modernistic means. Not only the color-scheme, but the meticulous, minimal and graphic output is reminiscent of styles before his own era. His works move between painting and drawing, figurative and abstract, lingering between form(alism) and context. Multiple layers of paint create an idea of space. Fox makes small works that together are like an installation. One can only think how many different ways to place them on the walls. Small works communicate with each other. When separately, the scale still holds a lot of energy and tension. His color schemes represent past times, giving nostalgic vibrations. As if an old gramophone was playing tunes, light curtain had moved to let air inside the room. Colors are contrastive, some of them pale and pastels, some dark and more graphic. Indeed, Fox uses interiors of his own work studio for inspiration, including windows, doors, curtains and so on, to introspect atmosphere. Yet the works have an appeal of formality and outwardness. He was presented by Patrick Heide Contemporary Art from London. 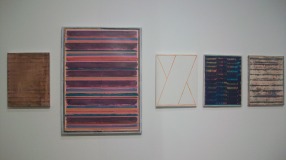 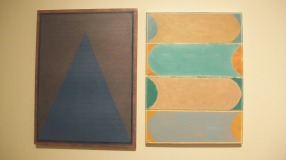