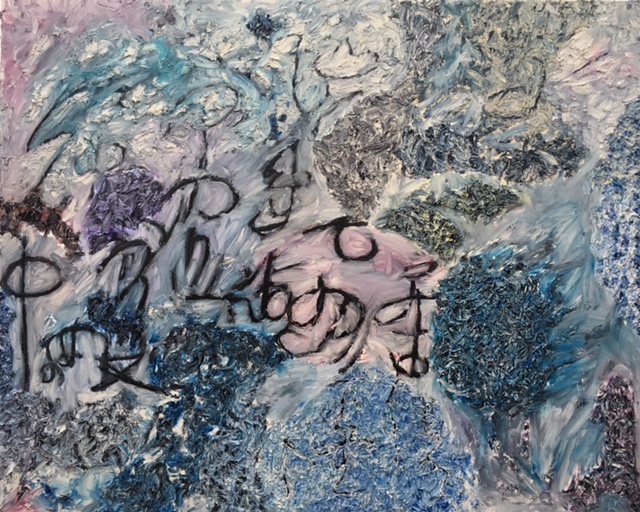 I moved to Los Angeles in 2014, after 11 years as a New Yorker. During those years, I went to graduate school, began and finished a career, learned to love opera, and mounted my first fine art exhibition – a crowd-sourced photography group show that was simultaneously a fundraiser for the nonprofit where I was a board member. What I never did in New York City was paint. At the time, my relationship to painting was purely as a viewer, standing a respectful distance away, wondering how in the world they did that. Who would have thought that three years later, at the instigation of my Los Angeles painting professor, the indomitable Barbara Kerwin, that I would find myself pursuing a graduate degree in painting?

Our first-year MFA group show was titled “Twelve,” for the 12 of us that started the MFA in Art program at Claremont Graduate University this past August. The works I created for the show were made with oil pigment sticks, built up into a thick impasto texture by smashing them onto the canvas with a palette knife and mixing colors alla prima. The paintings are about the loss of meaning and culture through the generations and across the seas. Words, behaviors, rituals become hybridized, sometimes beyond recognition, when transplanted to a different environment, just as language and writing change over time, eventually past the point of intelligibility. Each of my paintings starts with a Chinese calligraphic text, drawn in black, that becomes obscured through layers of superimposed texture and color, ending in a very different visual experience compared to the black and white text that “birthed” it.

The largest painting (60 x 48 in.) is titled “Outremer” (French for “ultramarine”). The cool colors and coral-like shapes evoke underwater life, but the title also refers to the French territories in the South Pacific (called “outre-mer” in French, meaning “overseas”), that were visited by Gauguin and others interested in the decidedly un-PC idea of “primitivism,” and also where France has conducted a large number of controversial nuclear tests. Thus, in addition to the Chinese text being washed away “underwater,” the painting’s title also alludes to aspects of modern world history that some might prefer to be swept under the rug.

Each of my paintings starts with a Chinese calligraphic text, drawn in black, that becomes obscured through layers of superimposed texture and color, ending in a very different visual experience compared to the black and white text that “birthed” it.

Patricia Chow is a Los Angeles-based artist whose abstract paintings engage the intersection of Eastern and Western cultures across time and space, and the hybridization and reinterpretation of meaning. She is currently a first-year MFA student in Los Angeles, CA.

Twelve is on view at the East and Peggy Phelps Galleries, Claremont Graduate University, through October 20, 2017.