“Anri Sala: Answer Me” -exhibition, which will be on display at the New Museum until April 10th, 2016, features multichannel audio and video installations. In his recent works, Albanian artist Anri Sala has interpreted musical compositions, classical works so to speak, with experiments that are structured into video and sound installations. The monumentally compound works navigate through the limits of our perception; mapping the sound and the spatial, and investigating the sound in the architectural spaces. This experiment transformed New Museum floors into symphonic areas of soundful meaning, leaving room for small encounters.

Anri Sala’s often political works have tested the boundaries of sound and language in our construction of cultural realities. From cultural point of view, his works seem to investigate contexts that are outside the dominant aspects of reality. Or the realities are rather revealed through the layering of world of sounds. We have adopted a notion that the words create the meaning in our cultural communication. Yet, as Sala with his approaches has shown, it is possible to challenge this definition further by mapping and deconstructing the terrain, in which words actually restrict our ways of interpreting or seeing the world. From this perspective, the everyday life is full of noises that communicate without restricted syntax. Sound, form this point of view, has a great capacity to alter meaning.

Sound’s features are attached to the material world that is so close to music. For Anri Sala, sound plays a role of an incomplete music, or music, which is in the state of becoming. Sound as a mediating device – even when it is real musical pieces divided into fragments – can document and edit reality, and communicate on a new level of poetic composition. This becomes immanent through the artist’s works, which New Museum profoundly projects. What stays with the viewer, is the personal corporeal experience, which is created in the architectural space as the entirely new perception. The change in the reception of the artistic works is focally in the embodiment. The surrounding sound world invites the viewer to walk into the next room full of sound. Or it freezes on the threshold, making the mystery of the sound’s origin more significant.

Fragmentation and repetition is evidential in Sala’s second floor installation. The work unfolds as a two-channel HD video from 2014: ‘The Present Moment (in B-flat)’. This installation depicts different interpretations of an original compositional score by Arnold Schoenberg, titled ‘Verklärte Nacht Op. 4’ (1899).’ On the video, the chamber music setting acts as a fictional rearrangement of the historical work. Two videos feature a sextet of two violins, two violas and two cellos that play solitary notes from the musical work. Eventually the original musical score unfolds. The audio-visual installation works powerfully on two separate screens absorbing the body of a viewer into its mellow soundscape. The intimate portraits of the musicians, the movements and gestures of their heads, hands, arms, and backs, act as counterbalance to the interior, in which their playing has been recorded. The setting of empty room or hall creates an atmosphere of a vast space that accumulates sound on multiple stages. Sala’s meditative and mesmerizing piece truly puts an emphasis on the present moment. 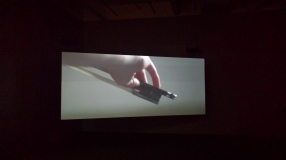 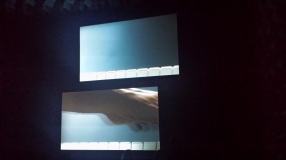 Upstairs, at the fourth floor of the museum, is a presentation of Anri Sala’s installation ‘Ravel Ravel Unravel’, from 2013. This is the work’s US premiere, it debuted in 2013 at the 55th edition of the Venice Biennale, where the artist represented France. In the title work ‘Ravel Ravel’ (2013), Sala reinterprets Maurice Ravel’s ‘Piano Concerto for the Left Hand and Orchestra in D major’. The composer created the composition in 1929 for an Austrian pianist Paul Wittgenstein, who had lost his right arm during the World War I.

The museum space, in which the ‘Ravel Ravel’ video is installed, is designed to absorb sound and prevent echoes. In this chamber like room, there are two unique and separate performance interpretations of Ravel’s composition taking place. The musical echo is produced with ‘in and out of sync’ parameter, as two simultaneous performances measure temporal dimensions. The two pianists gradually shift out of unison, they are projected with their performances with two different orchestras. The one might evolve slightly different from the other, creating a minimal echo. Shifting between doubling notes and echoes creates the difference of the entire work, leaving the spectator paralyzed and in awe.

Sala’s work contours in time, with tempo variation and within the space that has left no chance for error. The other video in the fourth floor being part of this work is titled ‘Unravel’, 2013. It debuted at the Venice Biennial alongside ‘Ravel Ravel’. ‘The Unravel’ video presents DJ Chloé Thévenin who takes part in the manual and physical manifestation of these two concerto recitals. She has the performance recitals on two turntables, in which she accelerates and slows the records in process. Fascinating, a visual turnout of the concerto sound in a new gesture.

More info about the artist and the current exhibition “Anri Sala: Answer Me” :

The exhibition info at New Museum