Pakistani-born, Dallas-based artist Simeen Farhat has taken a classic novel ‘Alice’s Adventures in Wonderland’ as a starting point for her new installation for VOLTA NY 2014 edition, which ran from March 6-9 in Soho. VOLTA is called as ‘invitational solo project fair for contemporary art’, so Farhat’s solo exhibition was equally presented by a gallery who is already endorsed multiple times by the fair. Her exhibition, curated by Christine Pfister of Pentimenti Gallery from Philadelphia, emphasizes a materiality of the language puzzles. The artist is known for creating poetic works with dimensionality and message, that come with the use of different languages and ways of communicating in our cultural encounters. This time, her colorful and even candy-colored sculptures and installation speak about the problematic nature of cross-cultural communication, showing the emotions and frustrations that are attached to the rules of using our languages. Farhat’s previous works have drawn from such languages as Farsi (RUMI poetry) and Urdu. Text used around the ”Alice” installation is English.

The immediate surface of the words come across as part of the form, and the text intermingles with the sculptural transparency. This already creates puzzles as we see only fragments of language, which, when viewed from a distance, create aesthetical form. When we step closer to the sculptures, the objects invite us to perceive them from different angles. Pink and black cast resin wall sculpture “She Looses her Temper”, is an example of Farhat’s sculptures that emphasizes the multiplicity of the form when viewed from various positions. As it comes to the emotional statements of texts, the ”pointiness” of words structure dynamic messages.

“Words – written or spoken, understood or misunderstood, poetic or prosaic, curvilinear or rectilinear, are what motivate me to create my visual narrative. I am fascinated by how, through language, we understand a great deal about ourselves and surroundings, and how ideas: simple, complex and abstract, are conveyed and understood using symbols.” (Simeen Farhat)

”Alice’s tears” create undoubtely the center of Simeen Farhat’s VOLTA installation. The blue teardrops in various sizes seem to flow effortlessly from the ceiling, pouring down from Alice’s eyes when she has grown tall.  The viewer can imagine Alice, by experiencing the shades of blue in the sculptures, some of them so light-colored that they are almost invisible towards the white backdrop, some darker. The shapes also vary from softer and rounder to sharper ones, and they accumulate and reshape closer to the ground. The tears are seen differently depending on the lighting conditions; the shadows are creating part of the narrative too. Farhat has sometimes included textiles into her previous installations to reference the (female) ‘body’. For Alice, the handcrafted cast resin has worked miracles. Different blue shapes and sizes embody the space leaving room for imagination and story. 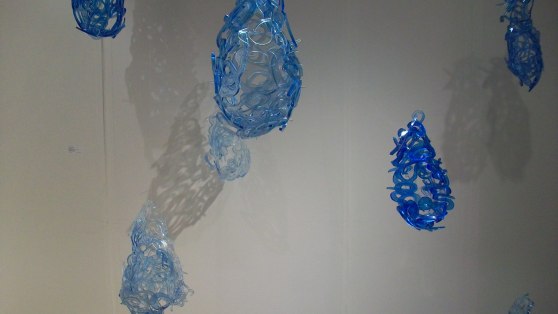 Simeen Farhat has exhibited in the United States and internationally, including Pakistan, London, the UAE, India, Finland and Germany. Her collaboration with Pentimenti Gallery will continue through 2014, and her solo exhibition will open in Philadelphia later this year.