At the Gagosian Gallery’s Chelsea location, opened a new exhibition around a theme of ‘impossible bouquet’.  Known for her challenging multidisciplinary photography, artist Taryn Simon has conducted extensive research for her current project Paperwork and the Will of Capital. The idea of ‘impossible bouquet’ refers to the Dutch 17th-century economy during which the market was booming. Simultaneously the birth of modern capitalism was reflected through the rich fauna of the era’s still-life paintings. The impossible bouquet is also an imagined bouquet. It includes flower pairings that cannot coexist in the natural world; the flowers are not blooming at the same time or they originate in different geographical locations. Today this economy has changed completely, when the global supply keeps bringing diverse specimen to the consumer’s market. The exhibition includes photographs of 36 bouquets formed as centerpiece and still-life. They gather thematically around 12 unique columnal sculptures, which also trace back to the fauna accumulated in the photography.  Next to the large photographs are their textual references connecting the arrangements to their sources.  The flower typologies in the artworks suggest real events that create the context for the exhibition.

These flowers sat between powerful men as they signed agreements designed to influence the fate of the world. —Taryn Simon

Memorandum of Understanding between the Royal Government of Cambodia and the Government of Australia Relating to the Settlement of Refugees in Cambodia. Ministry of Interior, Phnom Penh, Cambodia, September 26, 2014, From the series Paperwork and the Will of Capital, 2015. Archival inkjet print in mahogany frames with text in windowed compartment on archival herbarium paper 85 × 73 1/4 × 2 3/4 inches framed. © Taryn Simon 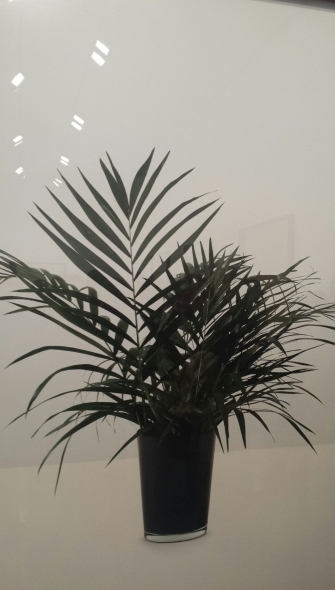 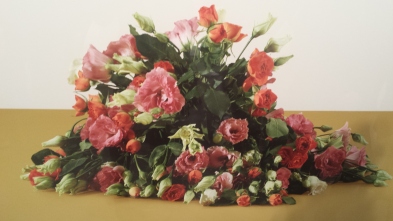 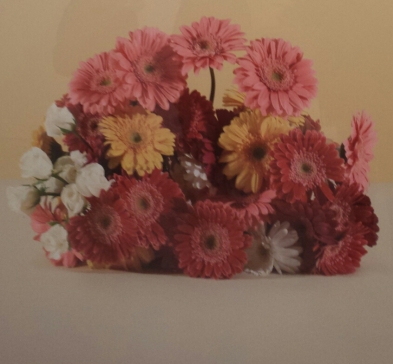 The exhibition is Taryn Simon’s first at the New York gallery. The sculptures displayed in the exhibition were previewed at the 56th Biennale di Venezia in 2015.  Now they appear  together with large-scale photographs that culminate as a complete body of work for the first time. During the process of making the photographs and sculptures, which navigate layered meanings, Taryn Simon worked together with a botanist, investigated archives, and benefited from 4000 different specimen to structure the process. Each specimen coming to the process was dried, pressed, and sewed into the herbarium paper. The artworks engage a level of communication as botanical collages, in a photographic form, and as pressed and preserved subject in the sculptures. The artist utilized George Sinclair’s nineteenth century horticultural study, which contains actual dried grass specimens.

As much as the flowers have decorative power, the art speaks with full textual meaning. The textual references attached to the photographs and sculptures, describe diverse political agreements that semantically ground the ‘flower fantasies’ into realities, which touch lives. In the past, the bouquets staged world dramas. In their present artful context they contribute to breathing new air into the archives. The level of ignorance on the agreement’s impact on actual realities is communicated through the floral that is now taken care of. In the art it represents the colorful, palpable, and vivid side of the reality. Among the textual references, there are themes of global trading of goods, and examples of the attempts to access natural resources over national boundaries and geopolitical territories. There are strategic negotiations, where commercial value has weight over human capital, or it entirely suppresses environmental viewpoint. Often the signing table puts a full stop to development projects, social welfare and economic aid. For the artistic series, Simon studied archival photographs of official signings. She examined accords, treaties, and decrees that were drafted to influence systems of governance and economics. The subjects include nuclear armament, oil deals and diamond trading.

The environmental challenge of the global flower distribution connects intimately to the exhibition narrative. Paperwork and the Will of Capital, implies the complications behind the global consumption. The underlying political themes communicate about environmental fragility. One of the flower narratives introduce a plan that was created around the Caspian Sea oil reserves, known as Baku-Tbilisi-Ceyhan Pipeline. As an outcome of this plan, Western nations would have more ideal access to the area’s natural resources and allude strategic presence in Central Asia.  The February 3, 2004 flower bouquet, testifying the signing of the finance package for constructing the BTC pipeline in Baku Azerbaijan, included: Baby’s Breath from Kenya; Dutch Iris from Netherlands; Israeli Ruscus; and Hybrid Tea Rose from Kenya.

Another environmental flower arrangement relates to the 2014 agreement to conduct studies on the Grand Ethiopian Renaissance Damn, bringing in parties from Sudan, Ethiopia and Egypt to negotiations. The construction of the damn contests the neighboring countries, because the negotiations handle the water rights to the Nile. While still in the construction process, the dam will be Africa’s largest hydropower project taking massive segment of its infrastructure. The discussion challenges larger schemes linking back to the colonial history, which places Egypt as majority holder of the Nile’s water, when in reality Ethiopia, Kenya, Rwanda, Tanzania, and five other African states share access to its waters. The flowers present at the negotiations were: Gerbera from Netherlands; and Hybrid Tea Rose from Ethiopia.

Can flowers change attitudes toward things and ideas? At least, the commerce between flowers from different territories and geographical locations stretches boundaries as we know them. Sometimes flowers travel further than people. Anthurium, Netherlands; Dendrobium, Thailand; Orchid Venezuela; and Hybrid Tea Rose, Kenya, were at present in the memorandum held to negotiate the status of refugees and asylum seekers to Australia. The negotiations took place in Cambodia on September 26, 2014. Australian refugees from the refugee center located on the Pacific Island of Nauru were to be transferred to Cambodia into a permanent resettlement. By shifting their refugee responsibilities elsewhere, the economically advantaged Australia signed to exploit one of the poorest nations in Southeast Asia.

Highly conceptual thoughts embed the large photographic prints and their similarly intentional sculptures within a frame of time that scopes past and attains to preserve some for the future. It seems that the fragility of flowers echo past remnants, but more forcibly introduce newly fluid forms. The photographs speak through large canvas. They accumulate painterly softness through the backdrops, and the archival feel responds to the dimensionality of the bouquets. The floral appears as richly layered; the bouquets were photographed multiple times. Sometimes the setting stands still as if being part of a funeral setting, then the collage screams out from the mahogany frames. The bouquets are in a state of being and emerging.

Taryn Simon: Paperwork and the Will of Capital